A Meeting on a Hill

There she was, barelling her way uphill along her favourite jungle trail, thinking she was God's gift to trekking. " Way hay ... gonna break my record on this one!" she thought, when out of nowhere, a needle sharp twang of annoying stinginess abruptly bothered her lower spine, just above her coccyx.

"What the fuck!” she muttered, stopping dead in her tracks. Shifting her trekking sticks into one hand, she felt her back with the other. "What the ...?" she said looking over her shoulder and pulling a tiny needle-like object, complete with attached string, from the aggrieved area.  A small drop of blood trickled from the needle-end as her eyes followed the line of the string back to its origin.

There at the end of it stood a wrinkly, gummy, over-sized goblin of a haggard in a moo-moo, brandishing a peashooter. A hankie, knotted at each corner, covered his bald pate. He hacked a cackle at her while resting his free hand on the place where his hip curve used to be, and pointed at her with his bulbous belly.

"For fucks sake! What's the craic? Can't ya see I'm walkin here! Shag off ya old fool will ya, and let me be." With that, she turned and resumed her barrelling to the echo of his wheezing laughter. The laughter stopped soon enough, but then, thwhoop, a new projectile came a-piercing, this time, at the back of her right knee.

"Fffffffffuck!" she yelled in pain, leaning over on her trekking sticks for support. Looking behind her again she could see the needle had gone in this time, and all that was sticking out was the attached thread which ran back to the free hand of Age, who minxishly tweaked at it like a puppet string.

Magzie hopped a little as the string went taut, then limp, then taut again. Sucking in the pain, she reached into her hip-pocket for her leatherman. She opened it up and snipped the thread, then turned to face her aggressor with the look of the devil in her eyes.

"Sure, what goods cuttin' the thread goin’ ta do?My needle’s still in there." he said unperturbed, pointing at the offended knee with his peashooter.

"It's MY knee though, not yours, and it does what I tell it!” she shouted. “It might sting a bit, but it knows it has a job to do. It’ll wait to cry until I let it."

At that, Age loaded up his peashooter again, and took aim, a little more seriously this time, for her right eye. Magzie held her ground, and they glared at each other while he inhaled. He held his breath a second, then, thwoop, a new needle took flight.

Like a slow motion action scene from a Marvel superhero movie, Magzie leaned her head slightly sideways when the missile was within millimeters of her eye, and stopped it in its tracks with her hair.

"Explain that one to me now?" she asked, somewhat derisively, as she straightened up and evicted the needle from her coiffe.

"I know that eye is fecked ... just trying to put it out of its misery!"

"I'll aim for that one next"

"Off  witcha Robin Hood! I may have a hundred pictures in me photo books, but I got a million in me head. I know this path like the back o' me hand. I could make it up here in the dark!"

Age's eyes glossed over with anger, and before she could ready herself he had his peashooter loaded, with a bigger needle and thicker string this time, and thwooped it at her heart.

It bounced off her chest, and fell useless to the dirt.

"Ya gombeen! Do ya think a lass as fabulous as me gets to this point in her life without her heart having been harassed numerous times? It's pure scar tissue yer hittin buddy!"

“Gombeen is it?” Age spat as he furiously reloaded

Seeing where this was going, Magzie threw aside her trekking sticks and, stirring up dirt and dead leaves with the forcefulness of her intent, assumed scrum position.

“C’monnn ya scumbag!” she yelled, thumping her right shoulder with a fine slap of her left hand, allowing him to hear the concreteness of it. He double-took, but continued to load.

“Bring it! Ka Mate Ka Ora Muhhhthur Fffuckur! I been trained by the best ya scut.” she growled, beating at her chest with the palms of both hands now.

Mentally tackled by her violent veracity, Age stopped what he was doing, stepped back, slowly pocketed his peashooter, and held his hands up.

“All right girl, chill out will ya. I'm only havin' the craic.” he said in a somewhat high-pitched tone.

Magzie pounded her chest a bit more, and gave him a Dwayne ‘The Rock’ Johnson-like ‘come on’ with a raised eyebrow and a twitch of her head. Age kept his hands up, sporting a weak, gummy smile as he did.

Seeing he was done, she unhooked from her war stance, collected her sticks, and reconstituted into an upright position.

“Ah relax will ya! Sure, I thought it might be a bit o’ fun, and I was thinkin’ ... it might be cool to introduce ya to me old friend here.” he said nodding sideways to the trees.

At that, Death strolled out of the shadows, rolling a spliff.

He stopped and stood nonchalantly beside Age, looking the complete opposite of him in gait and appearance. He slowly licked the rolling paper, completed his craftwork, and casually placed it in the corner of his full-lipped mouth.

There, the two, Magzie and Death, regarded each other knowingly. He had a little sparkle in his blue eyes, his head slightly cocked to one side as he looked at her while reaching into a waistcoat pocket for his Zippo. Finding it, he turned his gaze to his smoke and lit up. A gentle breeze unhooked one lock of hair from his pomade slicked quiff so that it fell into a bit of a curl above his brow, collecting some white smoke spirals as it did. He clipped closed the Zippo, placed it back in its pocket, re-fixed his attention on her, and extracted a tiny comb from another waistcoat pocket while sucking on his one-skinner.  Magzie watched with a little twinkle in her own eyes as he smoothed the renegade lock back into place.

“Well Brazen, still causin’ trouble I see.” he quipped as he replaced the comb, took the spliff from his mouth, and exhaled the smoke as he spoke.

Age muttered in confusion at the sidelines.

Without moving her gaze from D, Magzie responded to Age’s crumpled and creased look of disconcertion.

“Twice!” said D. “Ten months ago at my most recent count. I took a piece of your head then.”

“Ya did.” she nodded. “Not any bit that mattered though. Left me a bit scattered for a while, but taught me a lesson too. I see ya’ve had a bit more ink done since the last time we hung out.”

Looking down at the exposed forearms peeking out from the rolled up sleeves of his crisp white shirt, he nodded and smiled.

“Yup, Samoan fella I been waitin’ for finally stopped by and put his skills to work catchin' up on some overdue additions. Check this gem out!” he said gesturing toward the freshly-inscribed face of Johnny Cash on his right wrist, and starting to move towards her.

“Woah, back off  Big Man. I don’t need to be smellin’ your Hugo Boss. Last time that happened I woke up in a CAT scan machine missin two days of me life!”

“Ha! Fair enough. Our day will come.” he predicted, one side of his mouth curling up into a half smile, sliding the hand of the Cash bearing wrist into his jeans pocket. “I’ve a spot kept for YOUR face right here on my shoulder blade.” he said playfully, pointing to her first and then his left shoulder with the thumb of the spliff holder.

Age was getting twitchy, not really sure what was happening, and feeling a little left out. Magzie, starting to get restless too, reset her sticks and turned to conquer her hill again.

“Yup, it’ll come alright, and that’ll be some session. Better start stockin’ that fridge o’ yours with some good dry cider.” she called over her shoulder as she started to barrel off. Her right knee let a little crack of a weep out of it. “Stop wingin' will ya, there’s trainin' to be done. We’ve Fuji in 3 weeks, an’ I ain’t got time ta bleed” she chastised under her breath as she moved.

“That Shitehawk next to ya AINT invited!”

The Serpent’s Kiss … and some really bad beard rash! 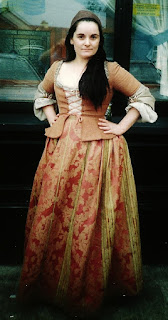 I woke up recently to the news that Pete Postlethwaite had passed away. Shortly afterwards I found myself wandering into the sitting room, over to a bookshelf where my mother keeps old photos of us in frames. There I was, bold as brass, displaying the natural curves God gave me with the help of a lace up corset .
That was an incredible summer, and one that marked the end of one life and the start of a new one for me. I had moved to Cork in anticipation of starting University that autumn. The move had been sparked by my father’s redundancy and the realization that there was no longer such a thing as a ‘job for life’. I decided to pack in my own job and go back to university to study something that I loved instead. Archaeology!
I found a room in a house near UCC and a job in a local B&B. Every weekend I would get the bus home to our little village to be with the family. 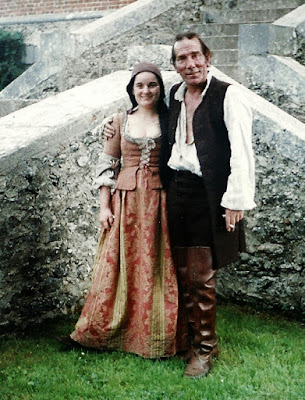 RIP Mr. P. You were a true gent, and a master at your trade. Thank you for being so generous with your time and character. It was a pleasure to have met you. M.M.
Posted by Unknown at Sunday, June 26, 2011 5 comments: